Large-capacity power supply solutions like mobile power stations are used in film and television production. Although some manufacturers have equipped their own lighting adapters with V-mount batteries that support standard voltage and high voltage, they still limit the power output in battery-powered mode. This is a compromise on the ground output power of most standard voltage V-mount batteries.

However, this compromise will eventually be broken, and some lighting manufacturers have begun to lift restrictions on battery output power. Six months ago, SWIT launched the largest capacity V-mount battery PB-C420S, which has a terrifying 420Wh. But this battery runs at 14.4V/250W, which is not enough for some high-power lights. SWIT newly released 28.8V high-voltage 420Wh V-mount battery, which can power hungry cine lights.

HB-C420S adopts a white housing design, which is different from the standard 14.4V version to prevent the risk of misuse. The weight of 2.07 kg can be held by one hand. 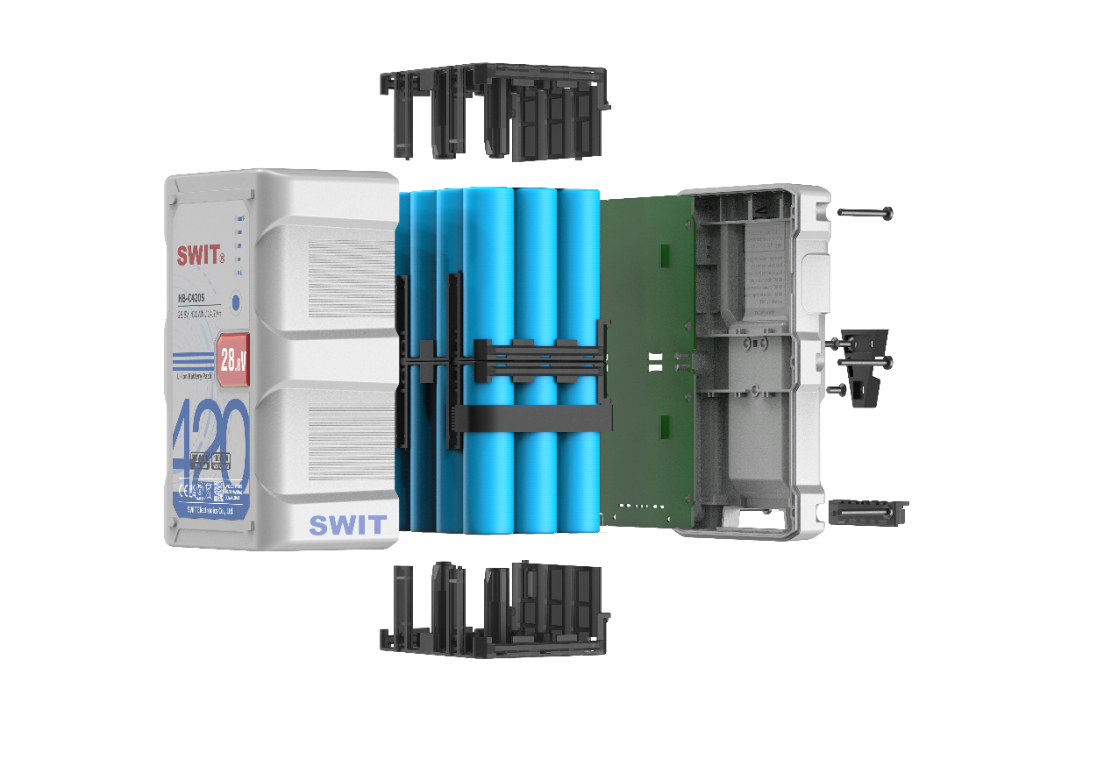 The HB-C420S uses a modular structure inside, and the batteries are protected by a bracket, which can effectively protect it from impact damage. The whole structure, including the electrode, is made of flame retardant materials to avoid any risk of burning. The modular battery pack is also easy to repair and replace, which avoids the damage to the environment and the waste of resources in the form of direct scrapping when dealing with damaged batteries in the past.

The HB-C420S has a peak power of 650W. Even with only 1% of the capacity, it can have a minimum output power of 500W. It can fully meet the driving requirements of most lights. For some lighting products with V-mount plates (such as Aputure LS600C Pro), after adjusting the relevant settings, it can achieve 100% brightness output equal to that of AC input. 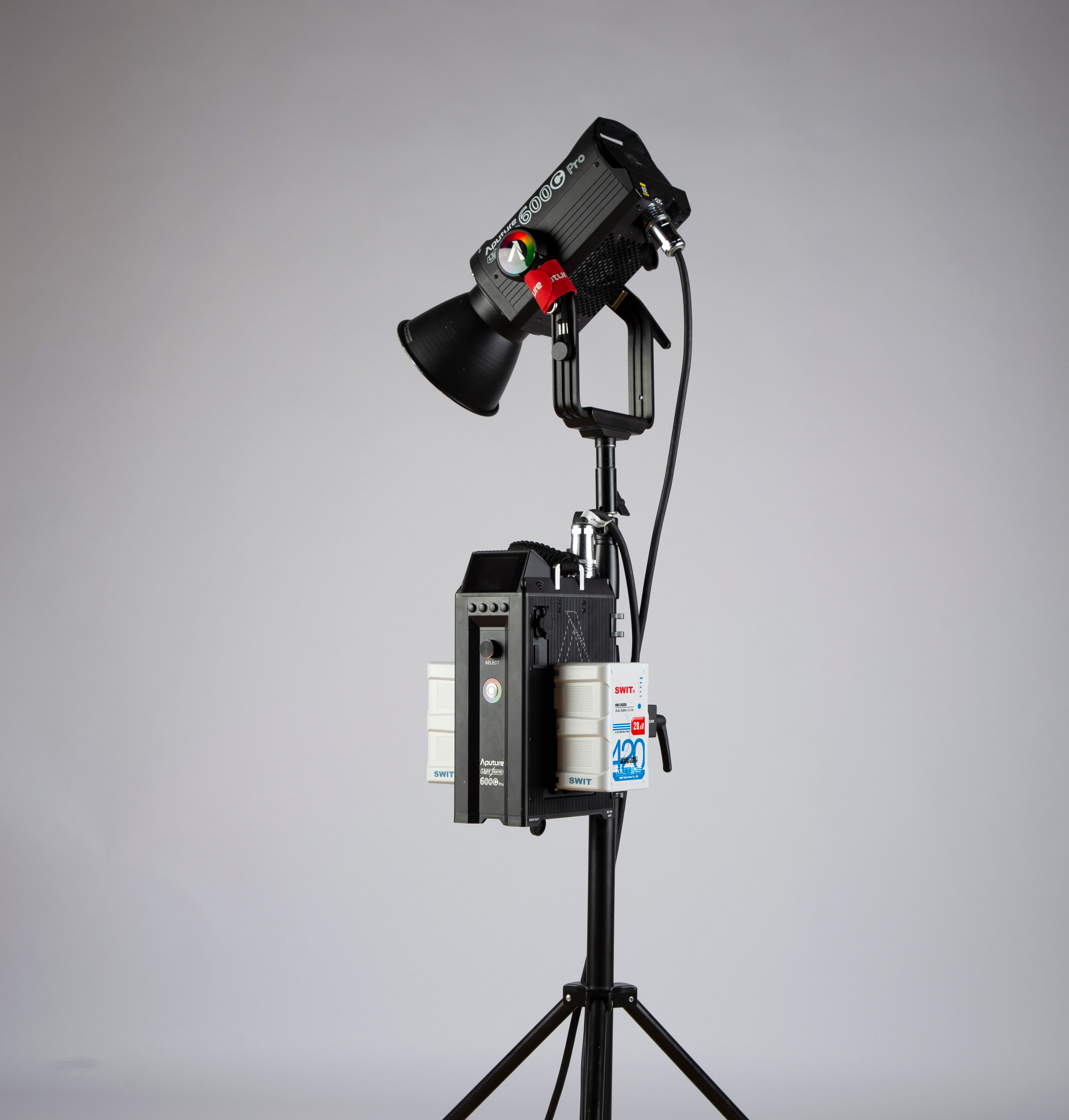 Paired with a SWIT four-channel high-speed charger, the HB-C420S supports 33.6V 100W high-voltage high-speed charging, which can be charged to 80% in 3.9 hours and fully charged in 5.3 hours. According to the traditional charging speed, it can save 50% of the time. The S-7250S can release the full 500W of HB-C420S, and provides a Neutrik SpeakOn DC output, which can be directly connected to the light. Of course, the S-7250S can also support any V-mount battery, and it can output according to the battery voltage, with a maximum current of 20 A. 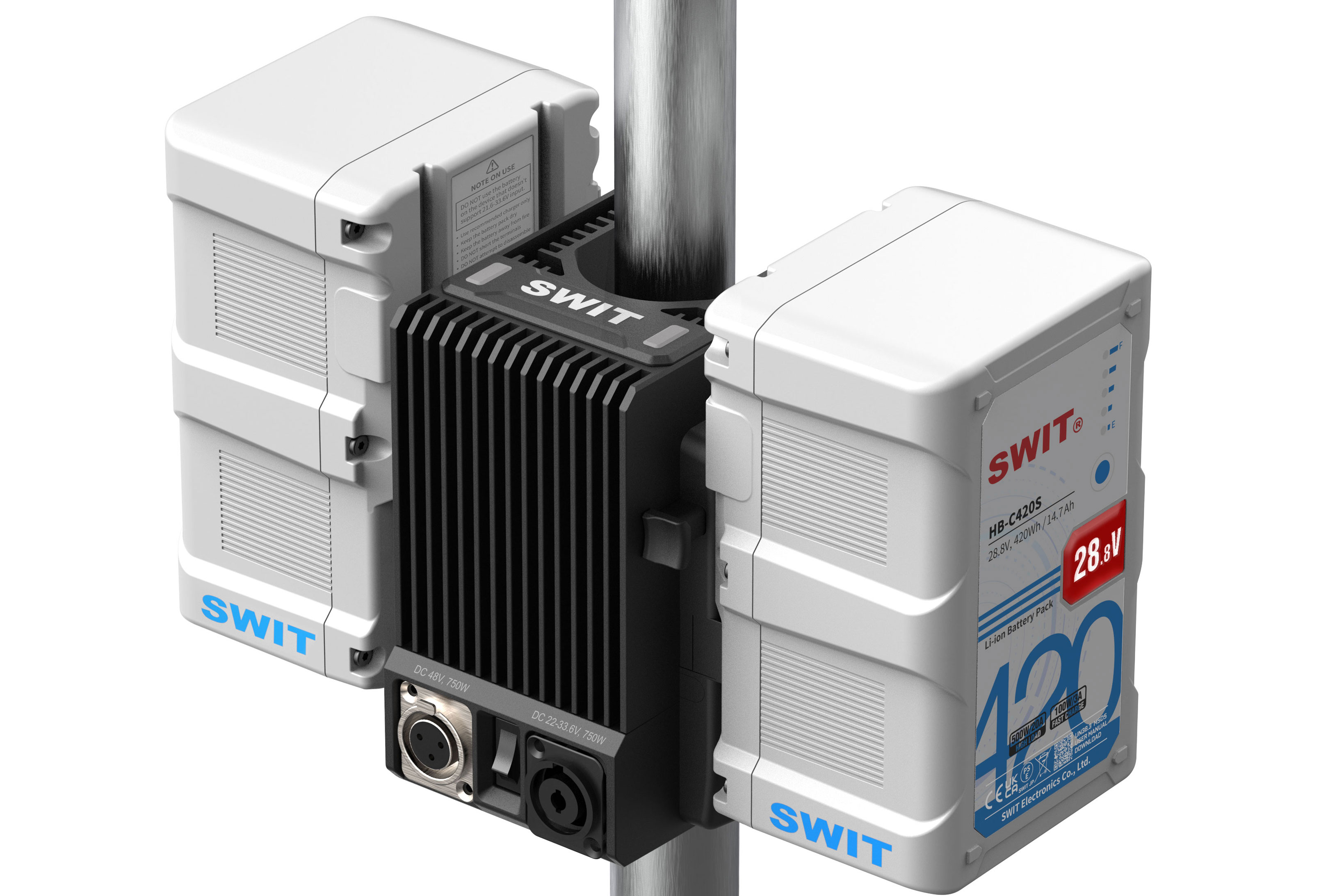 In addition to having the same DC port as the S-7250S, the dual-v-mount channel TD-R230S also has a 48V constant voltage conversion module inside, which can use two The HB-C420S to provide stable 48V 750W through 3-pin XLR output, which can cover the DC power supply requirements of most movie lights.

The HB-C420S provides a lighter and flexible power supply solution than block Batteries. Such a powerful battery can be charged and maintained like other V-mount batteries, and costs are lower. With S-7250S or TD-R230S battery adapter, HB-C420s can be more powerful, which is a comprehensive solution for movie lighting power supply. 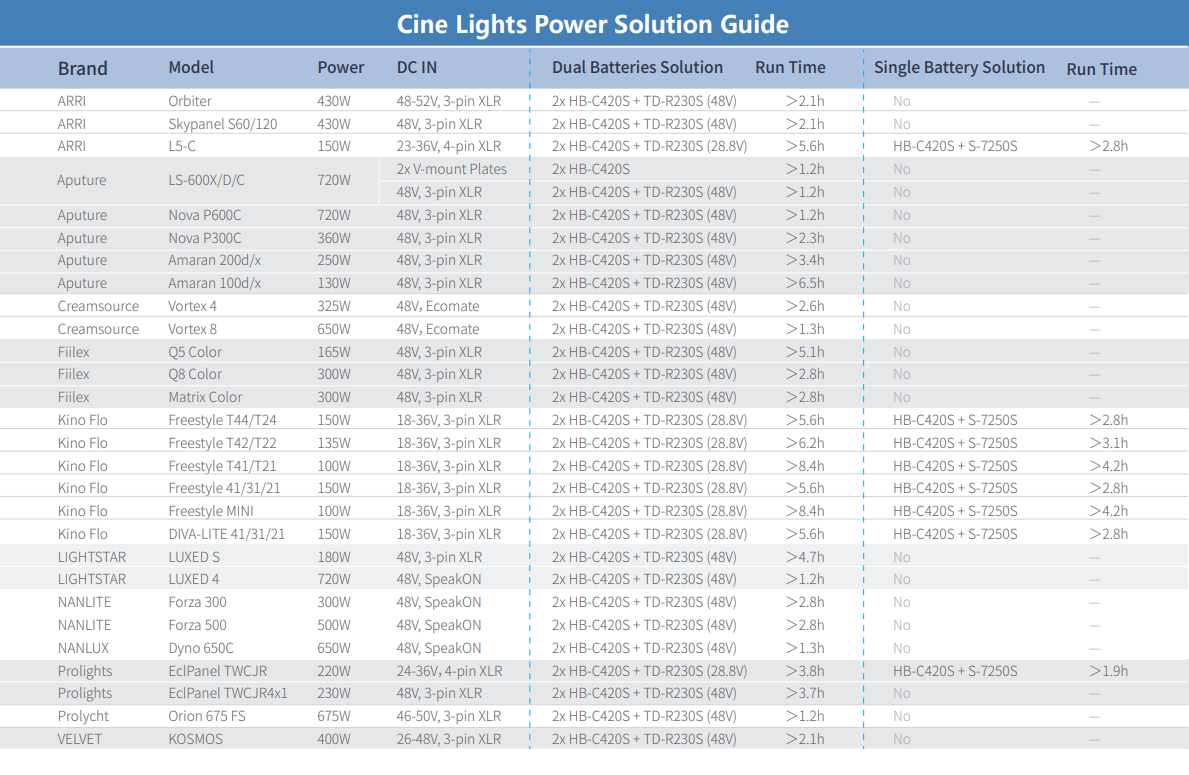 We will collect your personal data requested by this registration in our databese, and the data will help us to give you the best possible services.